The Appalachian Mountains of Western Maryland have some world class trout streams. This includes two rivers ranked in the top 100 streams in the country by Trout Unlimited: the Savage River and the North Branch of the Potomac. The Savage River consists of an upper river and a lower river. The 20 mile freestone upper river flows into the Savage River Reservoir before flowing out to form the lower Savage Tailwater. This is a large reservoir that releases cold water year round  from 200 feet down into the lower river tailwater that flows for 5 miles into the Potomac River. The upper Savage River is smaller and is essentially a large Brook Trout stream that has several smaller brook trout streams that flow into it before entering the reservoir. Rainbow trout are also stocked in the upper Savage just above the reservoir for a few miles. This is the only "put and take" area in the entire watershed. With over 100 miles of Brook Trout streams in the watershed, as well as a beautiful strain of wild Brook Trout, it is one of the few in tact systems in the country, and some consider these Brook Trout streams the real "crown jewel" in the mountains of Western Maryland. The Maryland DNR also does a fine job of protecting these streams with a zero creel limit on all Brook Trout.

A wild Brookie from Crabtree Creek in the Savage River Watershed 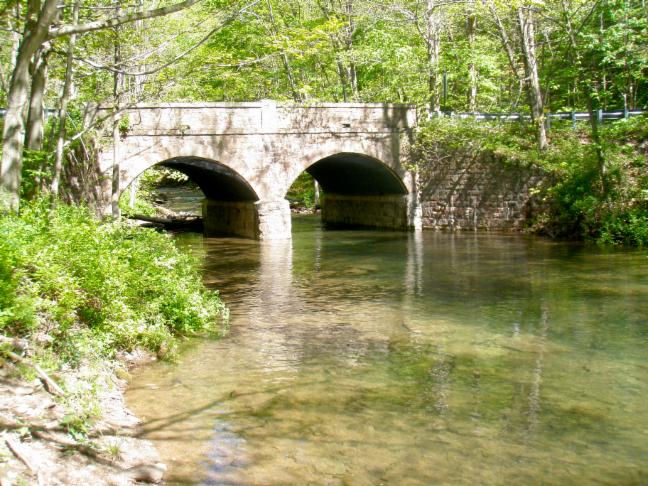 Middle Fork Creek flows into the reservoir and has a nice trail which follows the stream.

The Lower Savage River tail-water is by all measures a world class wild trout stream. Although it is only five miles from the reservoir to it's confluence with the North Branch of the Potomac, all of the river is easily accessed by Savage River Road. One of the great things about the Savage River, as well as all of the Brook trout streams in the area, is the location of these streams in the 57000 acre Savage River State Forest. All of the streams are lined with mountain laurel and the surrounding forest of giant hardwood trees, pines and hemlocks make for an amazing and beautiful setting. If you are a fly fisher that likes high gradient, tumbling clear water in a lush mountain setting, then you will love this place! And of course, there are the wild trout and the hatches. Some of the most colorful wild Brown and Brook Trout you will ever see are found in this stream. While the ratio of Brown to Brook trout may vary some from year to year, It seems to average about a 4 to 1, Browns to Brookies. There are also Rainbows and a few Cutthroat trout in the river as well. The number of these trout varies. Many swim up from the North Branch of the Potomac, or come over the reservoir spillway when there are very high flows out of the reservoir...usually in the early Spring. However, the primary draw is the opportunity to catch wild Brown and Brook trout...including some Browns over 20 inches and Brookies sometimes reaching over 14 inches. These are not routine catches....but Browns in the 15 to 18 inch range, and Brookies in the 12 inch range are pretty common. 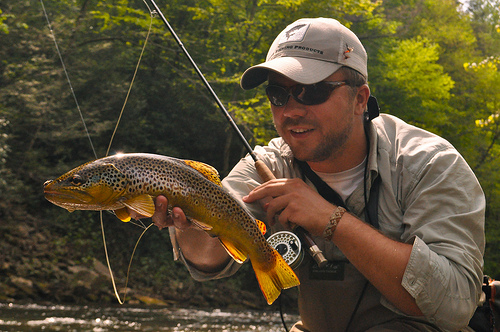 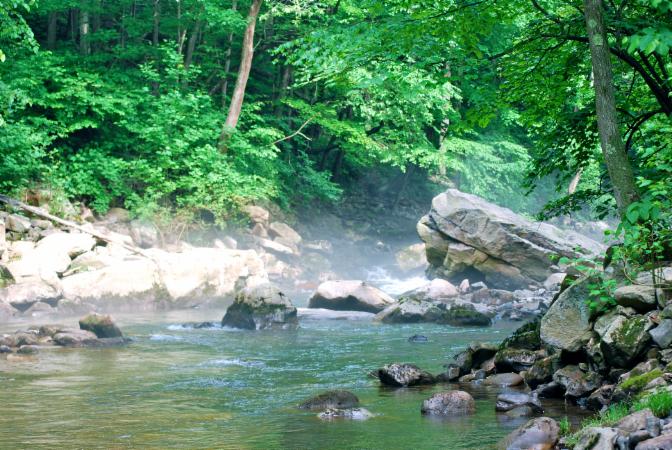 The other great trout river in the area is the North Branch of the Potomac. This river forms the boundary of West Virginia and Maryland. Thanks to a reciprocal agreement between the 2 states, you can fish from either side of the river with either state's license. The primary trout fishery is the section that flows out of Jennings Randolf Lake. For about 20 miles this is a great trout stream, then changes to a great small mouth bass stream. Most fly fishers concentrate on the 8 mile stretch from Barnum West Virginia down to the confluence with the Savage River. There is an old railroad bed  which follows the river for about 5 miles. So access is very good on this stretch by hiking or mountain bike. Sometimes referred to as the "Madison of the East", it is easy to see why. This is a big, fast moving river, with lots of structure....much like the upper Madison River below Quake Lake in Montana. And, like the Madison, the river bottom is very slippery....so, wading staffs are highly recommended. There is a lot of history as to how this river has transformed over the last 25 years from essentially a "dead" river, due to acid run-off from old mines, to a world class trout stream with a near perfect environment for trout. Lime dosing to counter the acid has been the primary cure. As a result, the insect life in the stream has continually improved, and although there are not typically great hatches, there has been considerable improvement, especially in the last few years. While this stream is heavily stocked by both states due to a long history of lack of re-production, during the last 4 years there has been a significant amount of re-production of wild rainbows and browns. This is obviously great news and a very good sign of significant improvement in the health of the river. With all of the stocking over the years, including many fish in the 18-24 inch range, the size of some of the trout here are pretty impressive. You have the opportunity to catch Browns and Rainbows over 20 inches. You also have the chance of catching a grand slam of Browns, Brook Trout, Rainbows and Cutthroat Trout. While most people wade this river, floating the river by raft is a good option and has become very popular. The float from Barnum WV to the confluence with the Savage is spectacular. If you have ever floated out West, you should try the N. Branch....great scenery and fishing without the crowds of boats! One last thing...there is good trout fishing from Westernport, just below the confluence with the Savage, for about 10 miles before it turns into a Small Mouth Bass stream. Floating is a good option here too...with wading access being more limited. Also, there is good trout fishing above Jennings Randolf Reservoir, particularly in the Spring when there is heavy stocking. 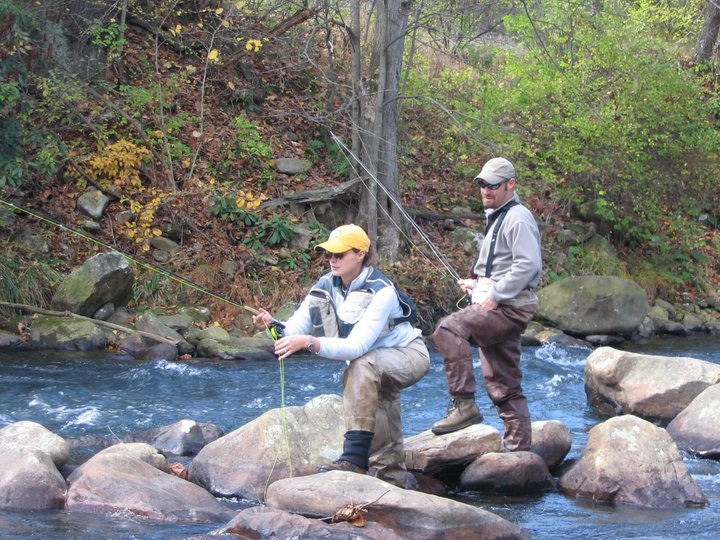 Fishing the North Branch of the Potomac